Our political system is broken. It is pay to play with no accountability.

As the Member for Brisbane, I will fight to: 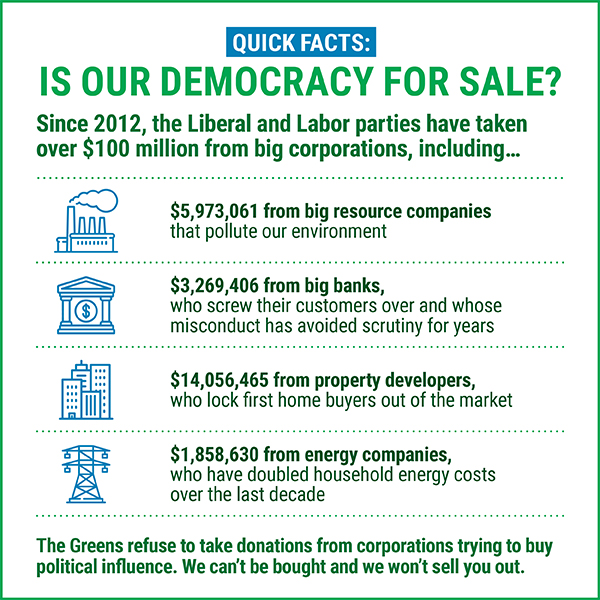 If a corporation donates enough money to the two major parties, they get a seat at the table and get to influence decision-makers as well as decision-making. Companies donate hundreds of thousands, if not millions of dollars, to political parties and expect a return on investment. These donors receive government contracts, hand outs, and favourable regulations in exchange. Corporate donations are holding our country hostage on so many fronts: action on climate change, housing affordability, access to green space in our cities.

DemocracyforSale has compiled a list of every donation to every political party from the past few decades. You will notice that it is not uncommon for the same company to donate to politicians in BOTH major parties. This guarantees them influence no matter who wins the election. They are able to donate unlimited sums of money to buy the legislation they want, often at the expense of communities and families.

The fossil fuel industry is estimated to gain $2,000 in subsidies for every $1 they donate. The Greens are the only party that refuses donations from corporations trying to buy influence. We will ban political donations from the mining, property development, tobacco, alcohol, and gambling industries to all political parties and candidates. We will cap all other donations and make sure every donation over $1000 is disclosed publicly, in close to real time. Our plan will ensure that all politicians are accountable to everyone – not just their big donors.

Confidence in politics is incredibly low, and that’s not surprising. Scandal after scandal has demonstrated that politicians from the major parties are representing the big end of town and their big donors, rather than the rest of us. But we don’t have a robust mechanism federally to ensure separation, or to prosecute politicians when they do the wrong thing. State and territory anti-corruption commissions have proven effective at investigating corruption and acting as a warning to potentially corrupt MPs and public servants that they will be caught.

The Greens National Integrity Commission was passed by the Senate in 2019. For three years it has been ignored by Scott Morrison and his LNP government in favour of the status quo - no rules, no code of conduct, and no accountability. This government has had years to pass this legislation and begin to restore integrity to our political system again. They have had their chance. They refuse to act.

It is not just politicians who need accountability, lobbying must be addressed too.

Professional lobbying can be a shady business. The public rarely knows who is meeting with politicians, for what purpose, and what outcomes are gained. And too often, politicians and senior staff members find themselves with cushy lobbyist jobs as soon as they leave parliament. That doesn’t happen by accident. Our plan will require the publication of information about meetings, such as the subject of the lobbying and we will enforce a five year ‘cooling off’ period during which Ministers and their senior staff cannot be engaged in private enterprise that raises a conflict of interest, or particular benefit, from their role and connections.